skip to main | skip to sidebar

"Any day is good if it is a birthday challenge. It can be hard. But it's better than some regular day."
- Pug Carter, age 5 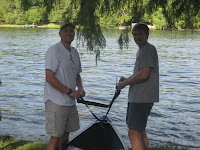 Before I get into the write-up, I have to take a minute and thank the big crew who supported me in this year's challenge. First and foremost, Megan, Pug, and Carly who put up with long absenses while I trained over the past couple of months and were then with me

at nearly every transition point over the two days of the challenge. And Megan did all the shopping, got things ready for the party, and still managed to do one of the kayak legs with me. 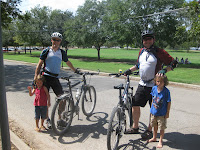 Then there was Bart Bombay, who came out and joined me for the first mountain bike leg even though he was resting up for an adventure race the next day. 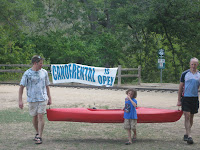 Matt Young, who is training for a challenge of his own in October, took off work early to join me for the first kayak leg and provided kayak support during my swim the next morning. 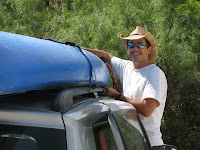 Mark Lowther and Matt Russell got up at the crack of dawn to get in a canoe and join me for the longest kayak leg Brad Roalson, a long-time veteran of the Birthday Challenge support crew, kept my spirits up during the last kayak leg
And Tony Fryer faced the brutal afternoon heat to join me on a mountain bike for the last leg of the challenge.
Thanks to all of you, I couldn't have done it without you!

So What Happened?
Saturday morning, I rose early and started the day with a pot of oriental flavored ramen. Feeling like I was in back in college already. I hopped on my bike and rode down to Barton Springs and swam a mile and a half. So far so good.

Then I got back on the bike and rode about half of the 40 miles up to Walnut Creek park. Mother nature was smiling on me and brought in partially cloudy skies which was a surprise since we are in one of the worst drouts in Texas history. Most of the days this summer have been in the mid 100's. Bart met me at Walnut Creek armed with my mountain bike wheels and two hot orders of fried rice. This was when I began to get a sense of what parts of the challenge were going to give me trouble. Fried rice is VERY filling. 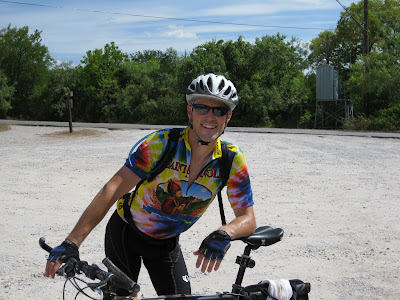 We ended up doing about 25 km on the trails. During those couple of hours, the clouds went away and I began to get hot and tired. Clearly it was time to refuel. Luckily, after a quick transition to change back to my slicks, I was on the road and only a few blocks away from McDonalds where I downed 4 orders of french fries.

Now it was time to head on to Mansfield Dam. This was when the ride really started getting tough. It was early afternoon and the heat index was up to about 109 degrees, and probably hotter on the blacktop. By the time I met up with Matt, Megan, and the kids at the Dam, I was hurting.

But everything changed when we got out on the water. A quick dip in the cold water coming from the bottom of the Dam brought my internal temperature right down. And the air just over the lake seems to stay much cooler than everywhere else in Austin. We made really good time on the first leg, which was about seven miles. Of course, all things are relative. I was paddling my old Perception Swifty kayak, which is anything but swift. In fact, it is a hog. The fastest I have ever been able to go in flat water is about 3.5 miles an hour. But anyway, the timing was perfect. We arrived at Selma Hughes park just as Megan pulled up with the pizzas. 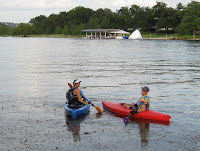 After a short dinner break, Megan and I loaded up the kayaks and were off for the next leg. Matt took the kids and met us five miles down the lake at Emma Long park where we camped for the night. Overall, the evening kayak legs were pretty nice. Not too much ski boat trafic, which kept the waves down. The cliffs along that section of the lake are really beautiful and teeming with birds -herons, egrets, terns, ducks of all kinds, etc... It would have been a nice way to end the day. 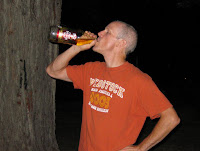 But I was on to the eating and drinking. Let me say now, "Malt Liquor is really bad." Luckily I was very thirsty and only had two forties to finish off. But they did not mix well with any of the food and it is pretty tough to keep a forty cold unless you slam it, which I was not going to do.

Day two:
The next day got off to a slow start. After the forties, a lot of salty food, and staying up playing guitar with Matt until midnight, I just couldn't face the 6:00 AM wake-up call. Even sleeping in 'till 7:00, didn't prevent the headache that lasted most of the day!

I started by making coffee and ramen on the camp stove, and then headed down to the park's buoyed off swimming area, where I was surprised to find a few hundred outdoor athletes warming up. Turns out the Xterra off-road triathalon was happening in the same park and was about to start. What are the odds? Why didn't I just do that for the birthday challenge? I guess that all those triatheletes would get awfully confused when I showed up on the starting line with a bucket of fried chicken and a forty. 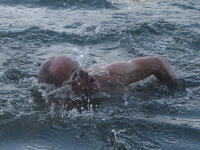 So I had to change plans. I waited until Matt woke up and got him to take out the kayak and paddle along with me so the early morning water skiers didn't run me over. I swam a mile in the open water of the lake to finish off the 4 km. 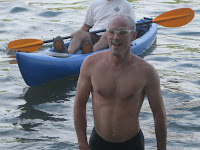 By then, Mark and Matt Russell had arrived and gotten the boats ready to go. I only paused long enough to heat up and wolf down a couple of orders of fried rice - the guts need fuel after all - and we were off in the boats. This was where my early morning delay caught up with us. It was saturday in the late morning and there were way too many boats on the water. Because of the drought, Lake Travis (the larger lake above Mansfield Dam) is closed to boat traffic. So everyone with a loud, obnoxious boat (jet skis up to cigarette boats) was on Lake Austin. 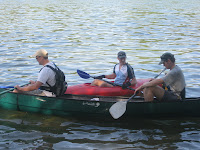 That was bad for me, but even worse for Matt and Mark in the canoe. They had water splashing over the nose on many of the boat waves. But somehow we managed to slog our way through the chop and avoided getting T-boned by any of the drunk meat-heads trying to impress their ladies by recklessly threading the needle between all the other boats at top speed.

When we arrived at the dam between Lake Austin and Ladybird Lake, I was both physically and mentally exhausted. Just right for a long, solo portage: hauled the boat filled with all my gear and cooler up on a dock, up a steep flight of stairs, through a parking lot to the street, a half mile down the sidewalk, down a steep hill, down another flight of steps, and into Ladybird lake.

This last kayak leg was pretty short and the lake was perfectly still in contrast to Lake Austin. We got down to the South First St. bridge in about an hour and were treated to the sounds of bands coming from a couple hundred yards away on the Congress St. bridge. It was "Bat-fest" and had a selection of Austin's finest bands performing on the bridge. After a few songs, we turned around and were about to head back the short mile and a half to the take-out when I noticed that we were drifting pretty swiftly in the opposite direction. In a display of poor timing, the Lower Colorado River Authority had decided to choose that moment to meet their daily obligation to the rice farmers down on the gulf coast by dumping dumping water through the dams. So for that last mile and a half, Ladybird Lake became a river and I got to paddle up-stream! 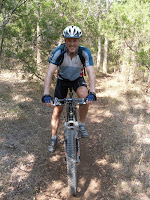 Needless to say, when I pulled up on the shore just below Barton Springs, Megan and the kids were an even more welcome site than usual. By now, I could practically smell the blenders going and the grill cooking at the house. So we made a quick transition to the mountain bikes and Tony and I headed out on the trail. We kept a pretty easy pace and I was pleasantly surprised to find I had enough energy left to work most of the obstacles. Only one slight miscalculation when I ran out of water at the base of the final hill, but by then I was so close to the end, it almost didn't matter. I pulled up to the house about twenty minutes later feeling on top of the world.

Of course, I still had a good deal of eating and drinking to do, but that is always easier when you are surrounded by friends at a pool party. In the end, I finished all the food except two of the Baos (they got left out all night) and two bags of popcorn (just got too full). A great challenge overall! 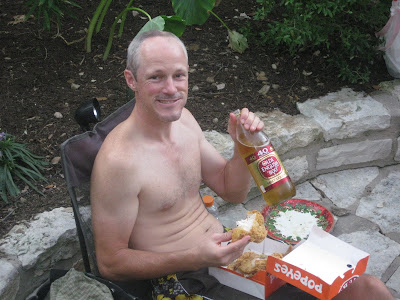